It remains and always is a dream for many among our local community to catch a Barramundi of trophy size.
Scores of anglers could be seen casting along our shorelines in search of lunkers.
More often than not, the lure of choice is often a hotly debated subject when it comes to targeting barramundi.
Here at ima Singapore, the Sasuke Family has well and truly established itself as our finest performer on Barramundi.
Here's some in newly released colours fresh from Japan !! 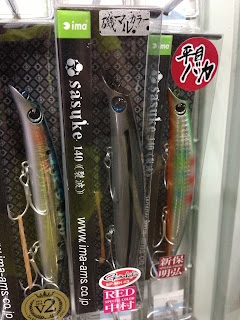 A good barramundi lure must be able to maintain it's swimming depth just beneath the surface.
Larger barramundi cruise just under the surface during nightfall and they prefer hitting topwater plugs or minnows swimming 1~1.5m beneath the surface.
The legendary ima Komomo SF-125 is famed for maintaing it's constant depth range of a flat 30cm, while the sasuke family dives deeper.
A slow retrieve is best suited especially at night, positioning your lures beside submerged structures or mud flats where barramundi loiter in search of baitfish.
Castability of the lure is extremely important as covering ground is crucial when searching for barramundi in open terrain.
Pick your spot out on the water and you will more than likely outcast your mark,  the larger Sasukes are that good !
Treble hooks are often beefed up to stronger ones, barramundi are known to freely dislodge hooks and in some cases, break them off completely:
I prefer to fish during the spring tides due to the massive volumes of water moving when the tide rises and falls.
Saltwater fish are sensitive to little differences in tides and current flow.
They appear to feed more actively and are bound to hit your lures at specific times of the current flow.

This barra was caught during the second quarter of a downgoing tide where the second tidal drop (measured in metres) is of the most significant during the night on the tide chart.

Sadly, due to overfishing and some selfish practises, our local barramundi stock has been in sharp decline over the years.
Catch & Release is vital to our local fisheries. extending to many species that were once plentiful but have become increasingly elusive.
Do your part in practising catch & release where applicable, take what you need and release what you don't !